July 09, 2017
Large impact craters are surrounded by secondary craters, appearing alone, in clusters, in lines, or even in loops. These craters extend to many crater radii from the primary (see Figure 1).  I'm concerned about secondary craters since multiple ejecta projectiles from a large impact could easily strike the surface in proximity to each other simultaneously... looking very much like a doublet crater.

Jay Melosh (1989) points out that as the range from the primary crater increases, secondary craters are more dispersed and their shapes are more circular.  The improved circularity of distal secondaries results from the projectile's higher velocity, and the highest velocity ejecta is typically going to travel the furthest. The lower density of secondary craters combined with them being more circular, means they look a lot like primary impact craters!


High-energy ejecta have a decent chance of landing close together at the same time, will look like primary impacts, and thus will be difficult to distinguish from real doublet craters.

Figure 1 shows the Lunar crater Copernicus and some of its ejecta rays and secondary craters.  A closeup of the area outlined in white appears in Figure 2. This image contains a number of secondary crater chains, potions of which look quite similar to doublets.  Figure 3 shows a pair of craters near the bottom of Figure 2 that look very much like a primary doublet crater, including the septum formed between them.

On Ceres, which has a much lower escape velocity than the Moon (about 500 meters/second), this should place a relatively low upper bound on the impact velocity for secondary craters.

I hope this will allow me to use circularity ratio and form ratio analysis to discriminate between primary and secondary impacts on Ceres (the craters with irregular rims, i.e., the ones that are less circular, should be secondaries).

NOTE: JMARS was used to create the figures in this post.

May 20, 2017
As part of my master's thesis, I am studying doublet craters (simultaneous, adjacent impacts of two bodies) on the Dwarf Planet Ceres, using imagery captured by the Dawn spacecraft.  It is my hope that learning more about these impact events can help constrain the frequency, sizes, and orbital characteristics of binary asteroids in the Main Belt. I look forward to doing similar work using Dawn images of 4 Vesta, the second-largest asteroid in the Solar system. I plan to use this blog to accomplish a few things: Document my scientific journey Share information I find about doublet craters and binary asteroids throughout the Solar system Give myself an additional reason to keep reading articles related to my research I make no guarantees as to the frequency or regularity of posts... my personal history would indicate that posts will come in bumper harvests separated by fallow periods. Enjoy! Paul Wren
Read more

Discerning Secondary Impacts from Primary Ones 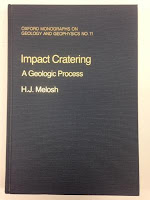 Figure 1: He wrote the book A Fortunate Encounter During the poster session at #LPSC2017, I was surprised and delighted that Jay Melosh stopped to discuss my poster on doublet craters .  Not only had I cited some of his papers in my work, but he also "wrote the book" on Impact Cratering (no, really !). Dr. Melosh was genuinely interested, and also pleased to see that my co-author (and graduate advisor) was Ron Fevig , a former student of his at the Lunar and Planetary Laboratory at U of A. After examining the images of potential doublets from my survey area, Figure 2: Doublet crater on Ceres he noted that the ones I had identified as "highly eroded" (see figure 2) may not be that eroded, but were possibly secondary craters, since their rims were irregular rather than cleanly circular.  He also referred me to his book for a good description. Refining Crater Identification Criteria Moving into the next phase of my research, I need to be capable of
Read more