Showing posts from May, 2017
Show all

Doublet craters and how they form 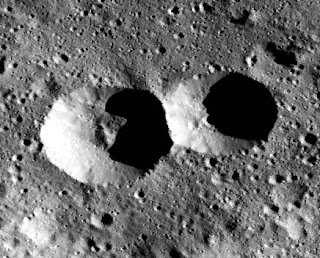 A doublet crater is a pair of impact craters in proximity to one another that are created by the same primary impact event. Doublet craters have been observed on Earth, on the Moon, on Mercury, on Venus, and on Mars. Doublet crater on Ceres. Dawn image FC0054639 ( NASA ) Doublet crater formation. Early research attributed doublet crater formation to a single impactor broken up by either atmospheric disruption or tidal forces, but further analysis revealed that these processes could not result in sufficient separation of the components to create observed doublets. It is now believed that well-separated binary asteroids are the true source of doublet craters. The percentage of impact craters in the inner solar system that are doublets would require ~15% of planet-crossing asteroids to be binaries. This makes doublets an excellent source of evidence for the prevalence of binary asteroidal systems, and can constrain the possible nature and formation processes for such binaries.
Post a Comment
Read more

May 20, 2017
As part of my master's thesis, I am studying doublet craters (simultaneous, adjacent impacts of two bodies) on the Dwarf Planet Ceres, using imagery captured by the Dawn spacecraft.  It is my hope that learning more about these impact events can help constrain the frequency, sizes, and orbital characteristics of binary asteroids in the Main Belt. I look forward to doing similar work using Dawn images of 4 Vesta, the second-largest asteroid in the Solar system. I plan to use this blog to accomplish a few things: Document my scientific journey Share information I find about doublet craters and binary asteroids throughout the Solar system Give myself an additional reason to keep reading articles related to my research I make no guarantees as to the frequency or regularity of posts... my personal history would indicate that posts will come in bumper harvests separated by fallow periods. Enjoy! Paul Wren
Post a Comment
Read more